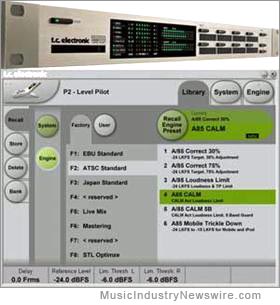 With the new version 2.35, dedicated processing and presets for working within ITU BS.1770-2, EBU R128, ATSC A/85 and TR-B32 environments is instantly available. The new version even lowers an already impressive latency of 1.8 ms to only 0.8 ms.

Trickle-down Processing:
The most audio-friendly and the least work-intensive way to simulcast to multiple platforms is known as trickle-down processing. P2 version 2.35 includes trickle-down presets for Mobile and iPod platforms within ITU BS.1770-2, EBU R128, ATSC A/85 and TR-B32 environments; still at 48 bit resolution and still at a latency of only 0.8 ms.

Broadcast Bricks:
TC Meters, TC Processors and Dynaudio speakers are coherent bricks in an ever-changing broadcast puzzle. P2 is a natural part of a closed loop that also includes:

Finally, the Icon application, included with P2, even provides a common control environment for more than 30 devices, accessible from a PC, a Mac or an Icon hardware remote for ultimate flexibility.