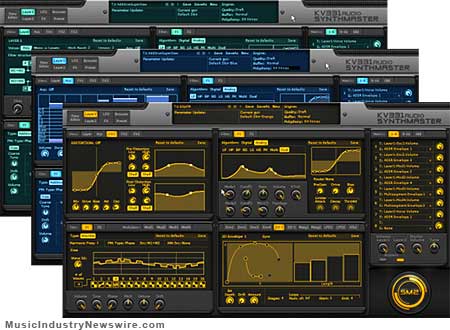 • Improved Filter Algorithms: The ‘analog’ filter models have been improved to better model the analog ladder filter. The ‘digital’ filters on the other hand have been rewritten from scratch for better VA sound.

• Before/After/Inside Filter Distortion: Custom distortion stage added into the filters so that signals can be distorted before, after or even inside the filter. With this flexibility, it is now possible to create screaming sounds using the filters in SynthMaster.

• ‘Dual’ Filters: With the new ‘dual’ filter type, it is now possible to run two multimode filters simultaneously, either in parallel, or in series. The mix ratios between the filters, and the topology (parallel/series) between them can be changed continuosly, as well as the modes and cutoff frequencies of the filters.

• Vector Synthesis: A new ‘vector’ oscillator type has been added to add support for vector synthesis in SynthMaster.

• 2D Envelopes: A new envelope generator type called “XY envelope” is added, so that line segments between points in 2 dimensions can be used to generate 2 dimensional envelope signals. XY Envelopes can be used not only for modulating “vector” oscillator x/y indexes, but also for all other voice parameters within SynthMaster.

• Sample Playback (SFZ) Synthesis: A new “sample playback” oscillator type has been added so that SFZ files can be played back. It is also possible with version 2.5 to generate SFZ files by dragging and dropping multiple WAV/AIFF samples onto an oscillator waveform display.

• Stereo Oscillators with Improved Unison: Oscillators in SynthMaster 2.5 have now stereo output. With the new “voices”, “pan spread” and “detune spread” parameters, each basic/wavescanning oscillator can have its own unison settings which eliminates the need to enable unison for all voice elements.

• Improved Modulation Architecture: The modulation architecture has been vastly improved, so that now there are 3 modulation sources available for each modulation target. A modulation matrix with 64 slots is also added. The matrix has filtering as well so that targets for a specific source, or sources for a specific target can be filtered and shown on the user interface.

• Improved Easy Parameters: The easy parameters can now be globally linked to MIDI controllers, and they can be assigned automatically by SynthMaster.

• Online Preset Browser: Registered users can now upload their own presets to the online preset library, or browse and download presets created by other registered users; using the preset browser right inside the plug-in UI.

• Multiple Skins: SynthMaster 2.5 comes with 3 different skins in different color variations. Using the included user interface editor, users can not only customize the existing skins but also can create their own custom interfaces as well.

• Flexible Effects Routing: With version 2.5, there is no more the differentiation of layer/global effects. Each effect can be inserted on a layer or on one of the 2 global effect buses.

• Better Reverb: The reverb effect in SynthMaster 2.5 has been improved and now it is a high quality reverb with advanced parameters such as 2 band EQs for early/late reflections, early/late mix ratios, damping control, distance and room size.

• Better Delay: The delay effect in SynthMaster has been improved and now it contains a 2 band EQ and a custom distortion curve to filter and distort the delayed input signal.

• Better Distortion: The distortion effect in SynthMaster has been improved and now it contains 2 band EQs before/after the distortion stage and a custom distortion curve as well.

SynthMaster 2.5 is available as online download at the introductory price of $99 exclusively at KV331 Audio website. The introductory price offer will last until October 20th 2011, and after then the regular retail price will be $129. Academic licensing is also available for students, teachers and academics for $59. Learn more: www.kv331audio.com .

A demo version of SynthMaster 2.5 is available for download at KV331 Audio website as well. The demo version is identical to the standard version except 3 limitations:

1) Saving presets is disabled
2) Mutes output and emits white noise at every 60 seconds
3) Comes with 150 factory presets (demo users can check out the remaining factory presets from the online presets browser though).