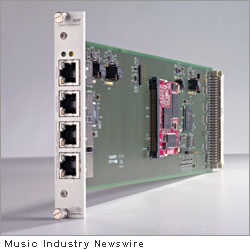 PORTLAND, Ore. (MuseWire) – At the 2012 NAB, Stagetec, a German manufacturer of professional audio technology, will introduce a new interface board for the NEXUS network system which can be used in new and existing networks.

The new NEXUS XDIP module supports up to 64 bidirectional audio channels with different sampling rates. SRC’s are included in the standard price with 64 on the inputs and 64 on the outputs (performed within the on board FPGA). It is fully compatible with Dante’s unique plug and play network integration with automatic device discovery and system configuration. A preferred field of application is installations where existing standard Ethernet-LAN’s are to be used for audio signal transmission.

Audinate has rapidly developed a reputation as an innovator and expert in the field of media networking. Audinate has pioneered an open standards based approach to develop high quality audio and media over standard TCP/IP computer networks. But Dante is more than a set of documents that define basic functions in a standard, but is a complete media networking solution.

“Stagetec is recognized as one of the premier Pro Audio manufacturers in the broadcast and live theatre industry,” says Lee Ellison, Audinate’s CEO. “We are very pleased to be working with such a recognized leader in their field and add them to our over 50 OEM partners who have adopted Dante.”