‘Songs For Singles’ are Paula Franceschi’s Dreams of Musical Seduction

LOS ANGELES, Calif. (MuseWire) – Many songs touch your emotions, but songwriter/singer Paula Franceschi (www.paulafranceschi.com) wants her songs to seduce you by creating pictures in your head. On her new EP, “Songs for Singles,” Franceschi is generating aural landscapes. “Each track let’s you act in a movie in your mind,” she states. 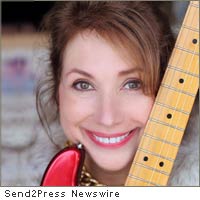 The five compositions on the EP all have some things in common. “They are stand-alone songs,” Franceschi states, “and they all deal with aspects of relationships, but another reason for writing and performing them was so they could be used in movies, commercials, TV shows, dance concerts, and film trailers,” she adds.

For years, Franceschi (pronounced “fran-CHESS-key”) worked on the production of motion picture trailers (sometimes called “coming attractions” by the public), giving her a unique perspective on how music interacts with images in motion.

It was her job to oversee the production of campaigns for such major motion pictures as “Schindler’s List” and “The Big Lebowski,” among many others. There is a strong tie-in between her trailer production work and her songs. “I consider these five songs to be ‘mini-movies’,” Fanceschi says. “There was a plan for every tune and every lyric to paint sonic pictures.” True to her business background, all five tracks are also available in instrumental versions.

About the “Songs for Singles”
“Confrontation” is like “West Side Story” done by Quentin Tarantino. “Throw It Away” accompanies you to a raucous South-of-the-Border party. “Ride” takes you to the High Sierra and beyond. “Reality” is filled with hypnotic Hawaiian dreaminess. “Rome” is like a fun Rick Steves travel episode. “While I want you to feel the emotion in each song,” Franceschi notes, “my real aim is to make you SEE things with my music.”

The unique design of the EP, with a cover and a CD label that appear to be 45 rpm singles, directly ties-in with the theme. “It’s a concept EP,” Franceschi notes, “except the concept is that the songs are individuals, ‘singles,’ and each one is like a musical trailer.”

As for the wide variety of music styles on her EP, “I was inspired most by John Lennon,” she explains, “because he wrote in whatever musical form suited the message, even if it wasn’t cool at the moment.” With the flow of emotion and imagery in her songs, each moment of this music is definitely cool.