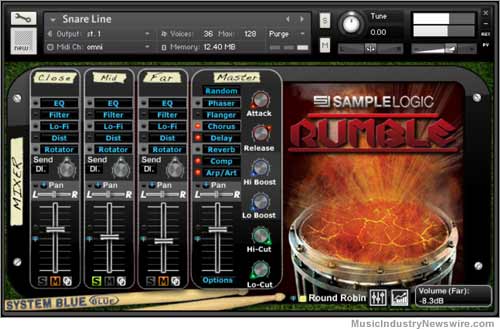 But that’s just the beginning…Rumble goes far beyond traditional marching drums and enters into the morphed sonic realm of Sample Logic’s trademark “blurring the line between music and sound design.” All of the drums recorded for Rumble are not only included as production-ready multi-sampled instruments, but are also used as the basis for all of the morphed sounds. The result is a library that contains both traditional instruments and an evocative collection of morphed “cinematic” instruments, including transitions, atmospheres, and rhythms aimed squarely at the needs of TV, film, game and electronic music composers.

A library that will stand the test of time. Every instrument included in Rumble has a full set of parameter randomization options that give you virtually infinite power to morph and sculpt any instrument in the library. Whether you’re in the studio or on stage, unique new sounds are always just one button-push away!