/MUSEWIRE – Music News/ — Man8Plant Records announced today the release of “Plague Baby,” a new video and single from Pete McCabe’s latest album, “Many Storyed.” McCabe is a folk and pop music artist, a troubadour and storyteller who is as topical and fresh today as the leading artists of the 60s were in their time. “Plague Baby” is thought-provoking with layers of meaning. You can listen to Pete McCabe’s music on any streaming service. 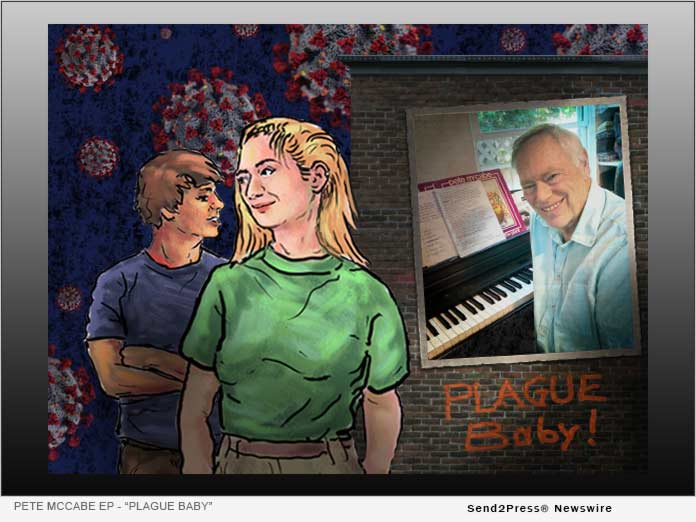 Pete McCabe’s love for his “Plague Baby” is a heartfelt tribute to his wife Diane. It’s an anthem derived from their struggles with The Virus during quarantine. For the video, Plague Baby, Pete plays acoustic guitar, piano and arranges all the other instruments. Pete made all the images for the video too.

Pete says “I knew our ever-strengthening partnership would see us through. Our personal quirks as well as our love for each other came into sharp focus. The daily death toll unnerved us, but…we were happy to ‘Hunker in our Bunker’ until the end of time.”

In the video, these lyrics hover over an “infectious” rock beat:

I need my Plague Baby!

My hunker in the bunker lady

Yeah, she’s got pizza in the fridge

What happens outside don’t matter to me

With her in my arms, that’s where I wanna be

Plague Baby, I do appreciate you lately

Plague Baby, I do appreciate you lately

Pete felt that what he wanted to say about these trying times needed a hard hitting, yet humorous approach. “Synthesizers and electric guitars felt right for this one,” explained Pete. “Much of my music has folk roots, but I like to expand into unknown territory. The virus put us all into a new situation. When the lockdown came, it was 24/7 time with my wife. Our love came into sharp focus. The daily death toll unnerved us, but we were happy to ‘hunker in our bunker’ till the end of time. The video shows such a couple as they battle the forces outside their little home.”

There is much more to the “Many Storyed” EP than just the single. Pete explores his roots in “Forgotten Folkies,” looks at the transformative power of sprinkles in “A Protest Doughnut” and even gets a bit sexy with “Hair of the Dog.” Pete McCabe’s new album is fun, quirky and eclectic.