The album will be available digitally June 1 on iTunes, Rhapsody, MP3.COM and all other digital services; and the CD (with bonus tracks unavailable digitally) will hit U.S. retail stores September 6 on Latin Thug Records, distributed in the USA and Canada by Koch Entertainment Distribution. 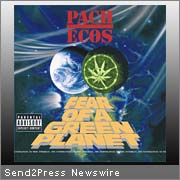 “It's a tribute to Public Enemy and to our favourite plant,” assures band member Danny Brasco.

“Yes it's true, with this record we want to change the world,” says band member Professor Angel Dust, smiling amidst a cloud of toxic smoke.

“We’ve played the majority of instruments in this album and we’ve done really what came out in the studio, adding many more layers of percussion, Hammond keys, bass and guitar than we did in the first Ã¡lbum,” says band member DJ Caesar.

â€œPina Colada is the big summer hit in Europe. It's bumping in every club and you heard it at every party at the Cannes Film Festival. Now its coming the USA,â€ says Latin Thug Records President, Fred Sherman.