LIVE NEWS: Open Labs announced today that they have refreshed their product line to their new generation 6 (“Gen 6”). The standard Miko and NeKo series have been upgraded from the prior Core 2 Intel processors to the Intel Core i5 3.33 Ghz. The upgraded version of the NeKo XXL model has swapped out the M-Audio Delta 1010 with a M-Audio Firewire interface with more outputs, and fewer analog inputs (8 out, 4 in). NeKo LX5 has been retired. New upgraded version of Reaper included in all models. 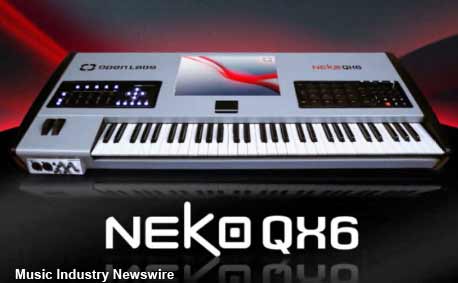 A brand new “Q” series has also been announced, which is much like the former LX series, and has a mixer panel along with BumpMP drum panel, but no DJ control or PC keyboard. The MiKo QC6 ($3799) and NeKo QX6 ($3999).

The Q series includes new version of Guru, Reaper, Mr. Porter Sounds. Wusikstation is now at version 6. Also, presumably the new version 2.0 of RIFF is included, which has been in “beta” since beginning of the year.

While the new Gen 6 models have Windows 7, it will only be 32-bit for now with 64-bit voiding the warranty. Which is unfortunate since 64-bit supports more than 4GB of RAM, which is critical for most “power users” running apps like Omnisphere, PLAY sampler, etc. This appears to have been done as the industry hasn’t fully caught up with 64-bit Windows 7 (Pro Tools, Native Instruments, etc.). So, with Windows 7, 32-bit, a user would be able to run the “beta” of Pro Tools 8LE/M-Audio.

The mixer panel on the Q series is much closer to the Gen3/4 models, including the TSE, with five mixing sliders, and the white/blue back lit buttons as on the TSE.

More news as it happens!

Updated: All the Gen 6 models seem to have done away with the venerable “DJ” panel and knobs, which I loved so much on the TSE (the panel that sat below the touch panel).

Updated: no clarification on whether the touch panel is a “multi-touch” model (more than two points of touch) to support those features (like zoom) in Windows 7. This feature was originally promised at trade shows when the DBEAT was being previewed, but that employee no longer works at Open Labs, so dunno the deal with that.

Without 64-bit support it’s unlikely the new models will lure in too many “scoring” folks doing soundtracks due to memory limitations, and with the DJ fader and mixing knobs removed from all the keyboard models, it seems to be moving away from the somewhat core audience of hip-hop/rap customers. Odd.

Also notable: on the “custom shop” page, the listings for hot rodding or upgrading the Gen4 TSE no longer seem to be there — the “Gen4” has specific notations in brackets as to supported models. So, anybody hoping to upgrade their TSE to a Gen6 will likely need to call sales to see what specific options are there. Other upgrade options will be posted in the coming week, according to the O-Live broadcast.

Correction: The MiKo LXD appears to be the only remaining keyboard based model with the old DJ panel below the screen.