High Wycombe, Bucks, UK (MuseWire) – Novation today announced the new addition to their synthesizer keyboard line-up, the MiniNova. As described by the company, it is “is a compact, super-cool performance synth with the same sound engine as it’s big brother: the UltraNova. It comes with 256 huge onboard sounds which you can tweak with 5 knobs, or totally warp with 8 ‘animate’ buttons.” 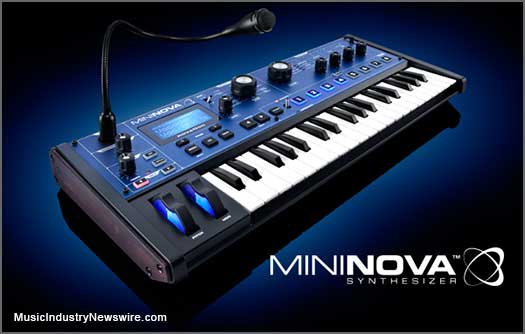 MiniNova also has an onboard VocalTune effect as well as a classic vocoder so you can recreate iconic vocal sounds from Hip Hop, Urban and electronic music.

MiniNova has 256 onboard sounds and space to save another 128 of your own sounds. You can quickly search for sounds by selecting the style of music you’re making, or the type of sound you’re after whether it’s bass synth, lead – hip hop or techno. MiniNova comes with a free software Patch Librarian so you can store as many sounds as you want on your computer. If 256 is not enough, there are numerous soundpacks for MiniNova assembled by renowned artists and sound designers. These include plenty of vintage synth sounds. They can be downloaded free from: novationmusic.com/soundpacks.