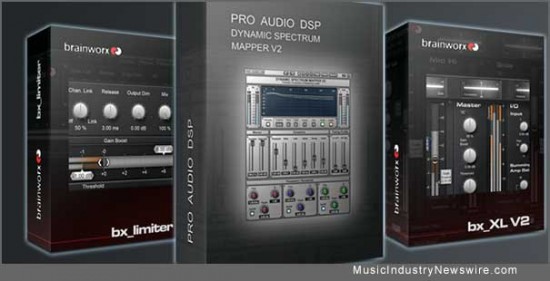 “We were extremely excited when we first found out about the DSM plug-in by Pro Audio DSP,” stated Plugin Alliance CEO Dirk Ulrich. “Given that Paul Frindle is the brains behind it, the capabilities of this truly unique plug-in are hardly surprising. In the last 35 years his contributions to the pro audio industry have been immense – not least by being part of the development teams for the SSL E and G Series analogue consoles and the Sony OXF-R3 digital console. I am very happy to welcome Pro Audio DSP as a new Alliance partner, and look forward to many more developments from Paul and his team in future.”

For his part, UK-based Pro Audio DSP Product Designer Paul Frindle is equally enthused by the cooperation: “I am very pleased and excited to announce our new partnership with Plugin Alliance, bringing their great track record of technical facility, industry support, and professionalism to our DSM product.”

Billed as being a Prismatic Compressor & Metering Limiter, Dynamic Spectrum Mapper V2 was developed by Frindle and Pro Audio DSP Software Architect Paul Ryder, formerly the principal software engineer responsible for the development and implementation of the Sony Oxford plug-ins and another key member of the Sony OXR-R3 console development team. In essence, a one-click ‘capture’ system lies at the heart of DSM V2, which uses groundbreaking adaptive techniques to capture both the frequency domain and dynamic characteristics of any audio material, then deploys this as the basis for a highly-developed, large-scale, multi-band compression process; as a result, it sympathetically handles programme over a wide dynamic range, even coping with large-scale percussive events that have hitherto confounded conventional compressors. Sonic character can conveniently be mapped between whole mixes, tracks, vocal parts, and instruments. But that’s not all; DSM V2 can also serve as an awesome de-esser or vocal enhancer and compressor. However it’s used, every little thing it does is magic!

Brainworx’s bx_limiter is a great-sounding, simple, but effective low-latency limiter plug-in designed to help determine how many dB of dynamics to reserve for every single signal. Users can create more space and dynamic range for the overall mix by limiting individual signals such as kick drums, snares, lead vocals, and bass. It’s important to structure mixes when mixing in the box; by cutting off peaks and transients in many different channels and stems a computer can output mixes that are ‘loud and proud’ yet still grooving – and all without unwanted distortion. As such, users will want to use many instances of bx_limiter on a typical rock/pop mix, yet they can seamlessly blend from link to unlinked modes for stereo mastering purposes. The Wet/Dry control can pull up vocal details in mixes, control bass sounds, and much more besides!

bx_XL V2 is based upon the M/S technology taken from Brainworx’s bx_digital, a ‘modern classic’ high-end analogue M/S EQ developed in 2006/7 and available as a plug-in ever since. As an M/S stereo mastering limiter plug-in, bx_XL V2 internally converts stereo signals into M (mid/sum) and S (side/difference) signals, splitting the M channel into high and low bands; limiting and leveling those three channels individually increases loudness and improves clarity of stereo mixes with much more ‘punch’ than any other limiter system. The MidLo channel can cleverly separate kick drums using the Crossover Frequency slider to limit them differently from the rest of the mid signal – perfect for all kinds of dance, rap, techno, and rock genres. Or opt simply for a 50/50 balance on the mid signal so each channel has less peaks to deal with. A perfect partner for bx_digital V2, positioning bx_XL V2 as the final plug-in on the stereo master buss makes for a sophisticated dynamics and loudness control system second to none!