WASHINGTON, D.C. (MuseWire) – On July 29, 2011, Secretary of State Hillary Rodham Clinton met with Grammy Award-winning musician and producer will.i.am of The Black Eyed Peas. During the meeting, Secretary Clinton highlighted the importance of educational and cultural ties between the United States and China, in particular, furthering the goals of President Obama’s 100,000 Strong Initiative to increase dramatically the number, and diversify the composition, of American students studying in China. 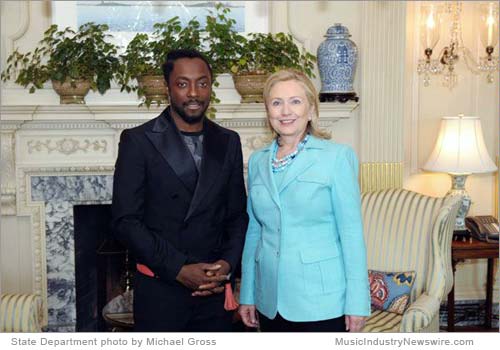 As a supporter of the 100,000 Strong Initiative and to highlight the overall importance of educational and cultural ties between the United States and China, will.i.am will direct a concert in Beijing later this year to benefit the Initiative. “In order to become responsible global citizens, young people need to experience the world around them,” will.i.am said. “Kids from underserved communities rarely have the opportunity to study and travel abroad, and we want to change that. We must make sure that American students have the cultural awareness and skills necessary to succeed in a global economy.”

The Beijing concert will celebrate U.S.-China educational and cultural exchanges and will include performances by will.i.am and other American and Chinese pop stars in promoting the 100,000 Strong Initiative. The concert is being organized by Americans Promoting Study Abroad, a U.S. nonprofit organization that offers full scholarships to public high school students in the United States for language and culture studies in China. Funds raised in association with the concert will be used to support and operate study abroad programs in China for underserved American students.

President Obama announced the 100,000 Strong Initiative in November 2009. Secretary Clinton officially launched the effort in May 2010. The Initiative is a public-private partnership; to date, private corporate and foundation donors have pledged more than $7 million towards the Initiative. The Chinese Government has offered 20,000 scholarships for U.S. students. To learn more about the 100,000 Strong Initiative, visit http://www.state.gov/p/eap/regional/100000_strong/index.htm .