TORRANCE, Calif. — Mindstock(R), a California based multimedia publisher of “elements for sound, music and vision,” announced today the re-issue of its decade old custom sample set for the classic Akai(R) MPC-3000. Three MPC3K(TM) sound sets will be offered absolutely free for download through the holiday season as part of the company re-launch for 2009. Mindstock is a unit of Neotrope(R), established in 1983. 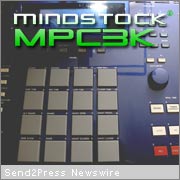 The three sound sets include the Mindstock MPC3K 8081 set, which includes custom samples of Roland(R) TR-808 and 909 drum kits; the FM3K set which has custom percussion samples taken from Yamaha(R) TX series synths; and the EUROHAX(TM) sound set, which has custom organic and electronic samples which recreate the flavor of 1980s europop. Total file size of the three sets is about 8MB in the free .zip archive download. The sets can also be ordered on CDR for $19.95 including shipping.

The free download is offered without any registration, membership or handling cost requirements, as a way to promote the company re-launch for 2009. The download will be available free through Jan. 31, 2009. A “sampler” kit can also be downloaded from the site.

Mindstock was established a decade ago by sound designer, musician, digital artist, journalist, and marketing guru, Christopher Simmons, who is a member of ASCAP and PRSA, and CEO of Neotrope(R) Entertainment. During 2009 the company will offer a wide variety of new sound sets sampled from Simmons’ extensive collection of modern analog and digital synths, with the first new sound instrument being the Mindstock Matrix24(TM) — an extensively sampled sound set taken from the venerable Oberheim Matrix 12.

The Matrix24 will be offered as a standalone instrument, and in products compatible with modern sampler applications like NI Kontakt, Wusikstation, E-MU Emulator/Proteus, and UVI. Full details and demos on our YouTube channel will be available late Spring 2009.