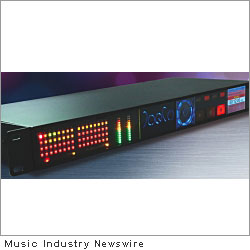 FRANKFURT, Germany (MuseWire) – JoeCo Limited introduces the latest product in its BlackBox range of multi-channel live audio recorders and players in the form of the new BLACKBOX BBR64-DANTE RECORDER that can record or replay 64 channels.

The BBR64-DANTE is the result of JoeCo’s collaboration with Audinate, creators of the award-winning Danteä digital media networking solution. The original BBR-DANTE system was released in 2011 and was able to record up to 32 channels of audio from a Dante network. The new BBR64-DANTE now doubles that track count to 64, while still occupying just one rack unit of space. The BBR64-DANTE Recorder connects to any Dante-enabled network device from a range of console and converter manufacturers. In addition to recording 64 channels at standard sample rates, it can also record 8 channels of analogue alongside 56 channels of Dante for capturing audience and ambience. Higher sample rate recording (88.2kHz and 96kHz) is also possible at a reduced track count.

As with all other BlackBox Recorders, audio is recorded in Broadcast WAV format to an external USB2 (FAT32 formatted) drive and can be instantly imported into any Mac- or PC-based Digital Audio Workstation for re-purposing. The BBR64-DANTE will also continue to offer all the standard BlackBox Recorder safety features, such as “Safe ‘n’ Sound Record Recovery” as well as providing hi-resolution metering and headphone monitoring of individual/pairs of channels via internal PFL bus.

Audinate is leading the way networks are connected by transporting high-quality media over standard IT networks. Its Dante products deliver a no-hassle, self-configuring, true plug-and-play digital audio network that uses standard Internet Protocols. Dante offers a market leading solution today, while taking the risk out of future developments by providing a migration path to upgrade to new standards such as the IEEE Audio Video Bridging (“AVB”).

JoeCo Managing Director Joe Bull said: “We are delighted to be showing the new 64-channel BBR64-DANTE Recorder at Frankfurt. Having successfully launched the 64-channel MADI product last year, we have been able to incorporate much of that core technology to create the BBR64-DANTE – it’s a completely different machine internally. Continuing support from our friends at Audinate has made this possible in a remarkably short time.”

“The BBR64-DANTE Recorder provides a high channel recording solution for 64 channels of networked audio,” said Dave Anderson, Director of Sales at Audinate. ”The BBR64-DANTE Recorder can interoperate directly with all Dante products on the network using standard off the shelf network switches, eliminating the need for expensive audio routers.”