CEDAR FALLS, Iowa — Iowa based powerpop band, Make This City, is set to release their debut album on December 23, 2008. Over the past months, Make This City has been recording in Cedar Falls based studio, Catamount Recording. The result is their debut album, “Live Love and Lies.” The album features nine catchy pop songs. The album will be for sale across the Midwest in most independent record stores. A detailed list can be found on their myspace page. For everyone who purchases their music online though. It will also be available to them through iTunes and many other online download services. The best place online to get the album will be directly from Make This City’s myspace page though. (myspace.com/makethiscity) where there will be purchase links. 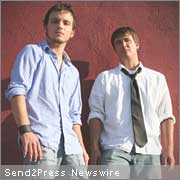 The album also offers a free ringtone to everyone that purchases the album. For everyone that would like more ringtones though, Make This City offers all their songs in ringtone form directly from their myspace page.

Make This City features two key members, Ben Lievens (vocals), and Travis Huisman (guitars). While both members have been involved in the music industry for the past few years helping other musical acts. They have teamed up to create this masterpiece of power pop music. Fans have already embraced the songs comparing them to The Click Five, Sr-71, and even The Jonas Brothers.

Within a few months Make This City has racked up more than 200,000 plays on their myspace. They have gained fans all across the Midwest by reaching out to their fans personally. They have spent weeks and will continue to spend more time leading up to the release, visiting all the Midwest metro areas. There they meet their fans and talk with them. They plan to visit Minneapolis, Milwaukee, Chicago, St. Louis, and more. Official dates are updated on their myspace page. Make This City has created a very impressive street team for any independent artist. Members come from all over the country. With members ranging from Florida all the way to Nebraska. Many fans have gone out of their way to create their own personal fan web pages about the band.

“Live Love and Lies” features 9 songs. It features upbeat songs such as: “Da Da Da,” “Oh No Here We Go Again,” and “Boys Will Be Boys.” Songs like “Winter In Chicago” and “Jessica and Danny” give the album its powerful pop ballads.

Make This City updates their myspace page daily. Keeping every fan up to date on stores carrying the album, new tour stops, and any other information people would ever want.