Introducing Jonny Harmonic, a new music star on the album ‘We All Love Bright Shiny Things’ from Golosio

LOS ANGELES, Calif. (MuseWire) – Introducing Jonny Harmonic, a mysterious musician who has never been seen in public. Some say he is a phantom, some say he is imaginary, but he has a new album from Golosio Publishing (www.golosio.com) called “We All Love Bright Shiny Things.” All twelve songs on “Bright Shiny Things” were composed and produced by John Scott G of Golosio, with performances by the reclusive Harmonic who would only visit the studio alone and in the middle of the night. 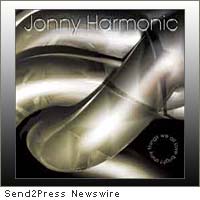 “We left milk and cookies out for him, just like for Santa Claus,” G stated. “He ate and drank everything, but the cleaning crew says the empty milk glass always smelled like scotch, whiskey or rye.”

About the Songs:
“Explosive Chill” combines laid-back electronica with eerie melodies that would be more at home in an experimental art movie. “Bright Sun at Midnight at the Top of the World” is pretty psychedelia. “Snakeneck” is an evil dance tune. “88 Gates of Knowledge” is an ethereal and contemplative track that composer G says is “drenched in reverie for the good times shared while two lovers are in an altered state of mind.”

All songs are on iTunes and videos for ten of the songs are on YouTube and FookMovie.com. The artistic industrial-erotic album cover photo is by Snook with art direction by Phil Hatten Design.

About Jonny Harmonic:
This is the written statement supplied by Jonny Harmonic in a request for a bio: “Mr. Harmonic has no comment on rumors linking him to Salvador Dali or anyone mentioned in the tabloids.”

About Golosio Publishing:
In addition to Scott G, songwriters working with Golosio include Doug Colosio and Scott Joss (country, Texas swing), James Sotelo (rock and electronica), and DJ Insane (trance), as well as many country writers. Doug Colosio has written with Merle Haggard and is featured on the Sony Acid “American Piano” recording. Scott Joss has collaborated with both Haggard and Dwight Yoakam.

Golosio music has been heard in commercials for many national and regional brands, including Verizon Wireless and General Dynamics.