LONDON, U.K. — EDIROL Europe celebrated their first decade in business at the London International Music Show (LIMS). As well as putting on a glittering party and boat trip, the company marked the occasion with an impressive, feature-packed stand in the heart of the main exhibition space. There was a dazzling array of hardware and software on offer for visitors to try, including the brand new R-09HR and R-44 field audio recorders and Cakewalk’s incredible SONAR 7 and Pro Suite music production software.

EDIROL Europe also hosted the live finals of the ‘EDIROL VJ Challenge’ on the stand with nine of Europe’s best VJs fighting it out to win nearly Â£2,000 of EDIROL gear. There were also special SONAR seminars designed to show how the award-winning music production software can be best utilised in education and project studios. 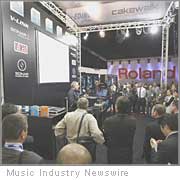 At Edirol Europe’s 10th anniversary party, Managing Director Massimo Barbini commented: “It’s been an amazing first 10 years, during which time we believe we have developed some of best products in our markets. We have now become the company to beat in desktop music production, field recording, and audio visual technology, and I would like to thank all of our supporters, customers, designers, dealers, partners, and the organisers of LIMS – it was a fantastic show for us at EDIROL!”

EDIROL’s highlights at LIMS:
* 10th Anniversary party and boat trip!
* The unveiling of some brand new gear, including the UA-25EX, a worthy successor to the industry standard UA-25.
* The finals of the EDIROL VJ Challenge – the winner will be announced soon!
* Important educational seminars for both schools and project studio owners.
* An incredible stand featuring all of the latest EDIROL hardware and Cakewalk software.

More about LIMS
LIMS is certain to become one of the biggest music making shows. It includes four shows for the price of one: the London Guitar Show, Drummer Live, The Sound Recording Technology Show and The Unplugged Show. LIMS 2008 also featured two live stages with appearances from some of the world’s leading musicians, and four massive halls full of the latest musical instruments and equipment from the world’s leading brands.

For detailed information on EDIROL please visit us on EDIROL Europe www.ediroleurope.com

About EDIROL
EDIROL, a member of the Roland Corporation group, is a world leader in the development and manufacturing of products for audio recording and video making. EDIROL offers solutions for applications such as Audio Capture and Field Recording, Video Editing and Live Mixing and Visual Performance.