Half Moon Bay, Calif. (MuseWire) – Dave Smith Instruments has released a keyboard version of Mopho, DSI’s popular desktop synthesizer module. The Mopho Keyboard is a monophonic synthesizer with an all-analog signal path, an expanded user interface, and a full-sized, semi-weighted keyboard action. From a functional perspective, the Mopho Keyboard does not do anything radically different. It is what most players desire and expect from an analog mono synth. DSI’s goal was ambitious in other ways, though. 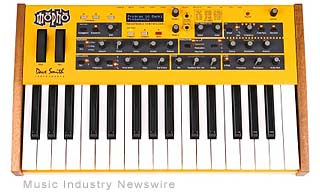 “It goes without saying that it had to sound good, but we’ve also managed to create a very portable, very playable instrument without sacrificing the performance features people want. And we did it without compromising and resorting to things like smaller, cheaper keys,” said founder Dave Smith.

“At the same time, we recognize that the cost of analog synths has long been a barrier for many would-be players, so the challenge was to make the Mopho Keyboard available at a price more people can afford. As I’ve said before, designing synthesizers is great, but it’s hearing what people do with them that makes it really fun.”

DSI’s Andrew McGowan added, “When we released the Mopho module we heard from many people that it was not just their first analog synthesizer, but their first hardware synthesizer. And that after experiencing a real analog synth they finally ‘got it.’ We hope the Mopho Keyboard gives even more people an opportunity to ‘get it.’”

The Mopho Keyboard’s voice architecture is essentially the same as DSI’s Mopho and Tetra desktop synthesizer modules. It features two oscillators, two sub-octave generators, selectable 2- or 4-pole low-pass filter, feedback, and a ton of modulation options, including three envelope generators, four LFOs, and a 16 x 4 step sequencer. It has a full-sized, semi-weighted, 32-note keyboard with velocity and aftertouch and full-sized pitch and modulation wheels. The Poly Chain feature enables expanded polyphony using other DSI synths. For example, combining a Mopho Keyboard with a Tetra results in a very portable five-voice poly synth. Other features include USB and the ability to process external audio through Mopho’s filter and VCA.

The Mopho Keyboard offers excellent value for classic analog sound in a modern, space-saving package. It is available now with an MSRP of $879.00 and an MAP of $799.00.