NAMM 2011 Anaheim, Calif. (MuseWire — Dave Smith Instruments today introduced Tempest, a new analog drum machine, at the 2011 NAMM Show. Tempest is a collaboration between Smith and longtime friend and fellow instrument designer Roger Linn. Though they’ve consulted with each other on past projects, Tempest marks the first time a product will carry both the Dave Smith Instruments and Roger Linn Design logos. “If you’re going to make a drum machine, who better to have in your corner than Roger Linn?” said Smith, referring to Linn’s legacy as inventor of the digital drum machine.

Though Smith is also responsible for some fine drum machines—most notably Sequential’s DrumTraks and Studio 440—Tempest is his first to utilize analog synthesis to generate the sounds. “We’ve designed a very flexible new synth voice for Tempest,” said Smith. Linn added, “The design of Tempest reflects a rethinking of what a drum machine needs to be in the current era. It’s not so much a drum machine as a new musical performance instrument for the creation, manipulation, and arrangement of beat-oriented music, with an intuitive and efficient use of human gestures.” 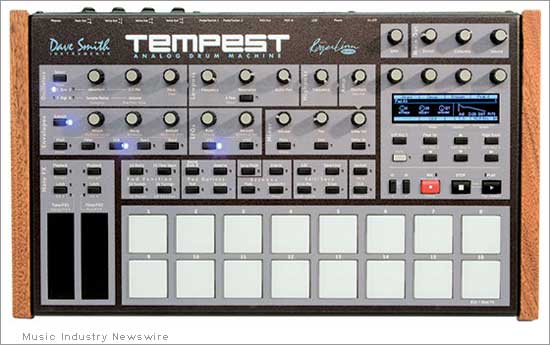 Tempest’s 16 velocity- and pressure-sensitive pads are arranged in an 8 x 2 array to facilitate both real-time and step entry of beats. Two pressure- and position-sensitive Note FX slide controllers provide a unique new method of performance and control.

“We’re very excited about Tempest,” said Smith. “It’s an instrument with a lot of personality and it’s great fun to play. It has been a long time since there has been anything new in the drum machine world.”

•Each of the 6 analog voices has 2 analog oscillators plus 2 digital oscillators (with a large bank of included samples), Dave’s classic analog low-pass filter with audio-rate modulation, an additional high-pass filter, analog VCA with feedback, 5 envelopes, 2 LFOs, an extraordinary variety of analog modulation routings, and stunning sonic quality, warmth and punch. Although optimized for drum sounds, it excels at tuned sounds as well, and even doubles as a 6-voice analog synth. In addition to the 6 direct voice outputs, there are stereo mix outputs and phones outputs, plus 2 inputs for foot switches or expression pedals, MIDI in/out and USB.
•The performance-oriented operating system, 90 panel controls, and bright 256 x 64 OLED display work together to provide a tightly integrated, non-stop workflow: record a drumbeat in real-time, switch to another drumbeat and use the lit pads to record it using step programming, switch to another drumbeat and record tuned keyboard parts, use the 2 touch controllers to to record real-time note or beat-wide parameter animations, use the generous sound controls to edit any of the drum sounds, tweak the analog effects or drum mix, arrange beats in real time and record the live arrangement into a song, enter/exit Song mode and much more, all without ever stopping play.
•16 pressure- and velocity-sensitive lit pads are arranged in a 2×8 configuration, providing intuitive access to all your fingers and providing the ideal compromise between the popular 4×4 pad arrangement (popular for real time programming ) and 1×16 arrangement (popular for step programming) because Tempest does both. The pads can be used to play 32 drum sounds (2 banks), mute/unmute the 32 sounds on playback, play and arrange 16 beats in real time, play one sound at 16 tunings (in a variety of scales) or 16 velocities, or as 16 time steps for step programming. The ROLL button permits creating drum rolls or repeated groove patterns by varying pad pressure as the beat records, and doubles as a momemtary “stutter” effect when the pads are assigned to play beats. Use the Sustain button on tuned parts like a keyboard’s Sustain pedal, or to choke drum sounds or drumbeats when the pad is released.
•Two pressure- and position-sensitive Note FX slide controllers permit real-time recording of note or beat-wide sound parameter changes into the drumbeat as you play. For example, record simultaneous filter frequency, tuning, envelope decay and pan changes for each note, or control similar parameters affecting the entire beat.
•A variety of unique effects are provided while maintaining a pure analog signal path: 1) Stereo analog compressor and distortion circuits affect the stereo output mix, 2) beat-synced delay is achieved by generating additional delayed note events within the sequencer, and 3) a beat-synced “stutter” effect is created entirely within the sequencer by looping short portions of the drumbeat on demand.
•The degree of swing timing can be adjusted in real time during playback. Roger used his entire bag of tricks to make the swing sound very human and natural.
•Compact and portable: 15.4″ L x 9″ W x 2.5″ H
Price and specifications subject to change.

Information about Tempest is also available on rogerlinndesign.com.