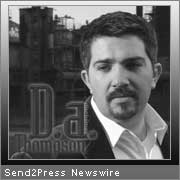 Disclaimer is a piano driven pop/rock/funk extended play album with fun arrangements and relatable lyrics. The EP delivers memorable hooks with hints of such artists as Billy Joel, Tears For Fears, and Jason Mraz. Disclaimer was produced by Loren Weisman, mixed by Scott Ross and mastered by Mark Alan Miller in a total of 110 hours over 13 sessions in the month of June 2009. 25 percent of this EP’s sales are being donated to artists working with Brain Grenade Entertainment in the FSRP program.

D.a. Thompson, a Seattle Washington based writer, speaker, and musician is tackling some of the front burner issues of today through a unique and diverse worldview. D.a. is expanding restrained horizons by mind, mouth, and music.

This is a Freedom Solutions Recording Plan (FSRP) album, meaning it was achieved using organizational recording methods developed by Loren Weisman. The goal of FSRP recordings is to help artists successfully budget and plan the production process. The FSRP also keeps the artist in control and full ownership of their music and involves giving a percentage of profits to a charity in which the artist believes.

Note: the artist’s website became defunct and no longer included in this article.