The dozen essays in “Jazz/Not Jazz” all tend to pick, poke, and prod the meaning of the term and the elastic nature of the genre. Which is good, but the book is often academic in the extreme and often turns into a snooze-a-palooza.

After trying for years to interest friends in jazz, it must be admitted that my success rate is zero. You cannot get someone interested in jazz if the necessary rhythms are not already in their soul. People with a pulse that swings will respond to good jazz but everyone else will just sit there with a blank expression, eyes darting around the room and shoulders slowly rising up as if hoping to cover the ears.

Reading some passages in “Jazz/Not Jazz” can produce the same effect because this is a book by people who are mostly tone-deaf to words. Or perhaps that would be prose-deaf. 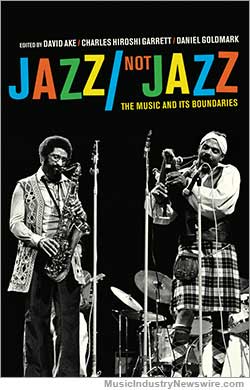 Admittedly, trying to define jazz is like trying to pick up drops of mercury with your bare hands, and while one does admire the effort, a book this poorly written isn’t going to help the cause. Consider this sentence: “Studying how musicians chose to position themselves along the continuum and the discursive strategies involved in acts of self-positioning provides an opportunity to witness the multiplicity and complexities involved in the processes of intercultural production.”

Yeah, I don’t know what it means, either.

Or how about this gem: “Contending with the ways that musicians, fans, and critics alike have defined artistic projects by investing in or rejecting elements of jazz’s assumed essence, at both musical and symbolic levels, gives us greater insight into the production of this music as a socially situated art and helps us to expand the parameters of jazz history and to rethink its ontology.”

At which point one can only place one’s fingers on one’s lips, nod sagely as if pondering some hidden significance in that blather, and emit an “ummmmm” sound while hoping one’s cell phone mercifully interrupts the reverie.

Perhaps I’m just not getting it. It may be that this is a brilliant discourse. An Umberto Eco style book with a plot that unfolds by folding in on itself. A Thomas Pynchon style book with layers of hidden meaning. Or a surrealistic treatise that is meant to fly in the face of mundane denotation. But what are we to make of passages such as this:

Identifying the complex ways musicians have identified with and distanced themselves from jazz and its subgenres as highly symbolic, multiply coded musical expressions and knowing that such moves are informed by an equally rich set of meanings associated with the genres and elements either incorporated into jazz projects or standing as constitutive others for jazz, provides fodder for expansions and refinements, or perhaps more radical reconceptualizations, of periods and genres.

Sometimes ya just gotta scratch your head, shrug, and move on with yer life. If only editors David Ake, Charles Hiroshi Garrett and Daniel Goldmark had done so.

The Good Amidst the Bad and Ugly

There are valuable points that are raised in the book. The unsigned Introduction deftly notes that “the lines some people draw between ‘jazz’ and ‘not jazz’ can be at once both fiercely guarded and very difficult to discern.” Continuing on, the section points out that

Early critical reception to the music was characterized by clashes between those who heard it as ‘primitive’ — oftentimes corresponding to the broadly racialized, sometimes explicitly racist, conception of composition and performance — and those who celebrated its innovative rhythmic schemes, timbral nuances, and sheer vitality. Commentators at midcentury questioned whether jazz was best understood as a folk expression, a commercial dance style, or an art form deserving of serious treatment alongside highbrow European compositions. Sweet versus hot, trad versus swing (versus bop), electric versus acoustic, avant-garde versus mainstream: these and other debates have been part and parcel of the jazz world for decades and continue to this day.

That may be more wordy than necessary (and who am I to mock someone for being wordy?) but the insights seem worthwhile. As does this passage:

The fact that many black jazz musicians had classical training has of course been acknowledged by jazz historians over the years, but it has rarely if ever been explored in any detail, nor has there been more than the most cursory focus on the black classical music scene and its relationship to popular styles. Though few writers have phrased their views so explicitly, many seem to regard the black musicians who devoted their lives to classical styles as little better than race traitors, or at best misguided figures seduced by the gilt and velvet of the European concert hall. As a result, the fact that Miles Davis studied at Juilliard is often singled out as an anomaly, followed by the observation that he shortly quit because he was learning more on Fifty-Second Street.

Some of the writing is based upon observation of a changing public. “Jazz no longer functions primarily as a popular music for dancing, socializing, and lighthearted entertainment, and jazz performances attract respectful audiences who remain quiet and often save their applause for the end of completed numbers.” Quite true and often quite sad. Good jazz is joyous. You gotta move and why not show your appreciation, even during a performance rather than waiting for the end.

But the good solos in this book are few and far between the mountains of verbiage and persiflage.

Back to the Bad and Ugly

Unfortunately, even the essayists themselves appear to achieve very few insights in this volume, as some of the chapters conclude with such bromides as:

It’s an ever-shifting work in progress, much like the music itself.

Yes, an ever-shifting work that you decided not to finish. And then they figure they can get by with something like this:

…the search for answers to all these questions can enrich our understanding of jazz.

The operative word in that phrase is “can.” Very few human beings will bother with the book, but there exists the possibility that enriched understanding might result from anyone who is able to wade through the damn thing. Here’s another sample of the erudition in this volume:

Ultimately, by questioning the common assumptions that fuel jazz debates, we trust that today’s scholars and students — and hopefully also fans, music industry professionals, and practicing jazz musicians — can profit by rethinking their own conceptions of this endlessly fascinating, vibrant, and evolving genre.

It may be difficult to argue with some of those points, but there is no evidence an entire book was needed to make them.

And what to say about a chapter on the humor of jazz which manages to be almost entirely devoid of humor? Or a chapter by a faculty member of a university jazz studies program who takes the surprising position of stating his support for university jazz studies programs? Wow, no one saw that coming. A lot of the book seems to be competing for inclusion in the New Yorker magazine segment called “Words of One Syllable Department.”

From the Supine to the Ridiculous

Some of the book appears muddled, such as when one of the writers refers to the “New York-centrism” of jazz right in the middle of discussions of music and musical influences of the Caribbean, Latin America, Africa, and South America. Perhaps I missed a point (there’s no way I’m going back to re-read any of this stuff) but it appeared disingenuous as I was reading it.

There is a ten thousand-word chapter on “Jazz with Strings” that manages to omit the Bill Evans Trio work with symphony orchestra arranged and conducted by Claus Ogermann, so one can only roll one’s eyes in disbelief. This in an essay that makes room for descriptions of the use of photographs of women on the album covers. (“Vinyl vixen” is the excellent term, but it was not coined by anyone associated with this work.)

There are moments when it feels as if the book will rise up off its haunches and get some work done. For example, one essay deals in “Black Revolutionary Nationalism and Asian American Jazz,” and it is interesting; yet I made very few notes while reading it as it covered its points within the first few paragraphs.

Some people love words and the way they can be used to communicate and/or convince. Other people love using certain words to demonstrate how scholarly they are. Y’know, to show they got smarts. The writers of “Jazz/Not Jazz” are in the second category.

In the world of advertising, hype, public relations, and ninth-grade essay assignments, this is called padding. Not sure what they call it at the University of California Press.

This is a case of a great topic in search of a great book. While possibly of some use to educators, and perhaps even to some music majors, “Jazz/Not Jazz” is of marginal interest to anyone else. Perhaps we normal type people are not the audience.

Playing great recordings by musicians in such genres as swing, bop, mainstream, post-bop, soul-jazz, acid-jazz, and free jazz is a way for listeners to form their own opinions and explore their own feelings about this glorious style of music. This is something I will do whenever anyone drops by my place. But this book they will not see.

Article is Copr. © 2012 by John Scott G and originally published on MusicIndustryNewswire.com before moving to its permanent home here on Ga-Ga.com – all commercial and reprint rights reserved. No payment or other consideration was paid to this site or the reviewer in preparing this original review, either by the book author, publisher or any agency.