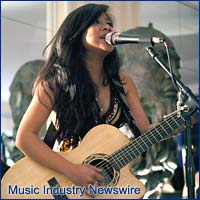 The release of the Encore series microphones marks Blue’s entry into the live sound market, bringing their 15-years of making high-quality studio microphones to the stage. With a rugged build, individual style, and quality components to help vocalists and musicians sound and look their best on stage.

The Encore 100 is a studio-grade dynamic microphone featuring Blue’s custom-tuned Aria dynamic capsule while the Encore 200 adds Blue’s Active Dynamic circuitry, providing the best of both a dynamic and a phantom-powered microphone. The Encore 300 is the flagship of the series and uses a hand-selected Aria condenser capsule with a matched pre-amp and phantom power circuit and custom tuned enclosure,

“Blue’s philosophy is built around modern, high-end performance with a unique and elegant style,” said Tyler Barth, Director of Marketing for Blue Microphones. “Built upon these same ideals, Esquire Soho was the perfect venue for us to launch the new Encore series microphones.”

Guests of the launch event were among the first to experience the superior sound of the Encore series microphones. Irish rock band Bell X1, fresh off of opening for mega-group U2 performed from their vast catalog of hits as heard on popular TV shows The O.C and Grey’s Anatomy and were followed by Zee Avi, an up and coming singer-songwriter who recently had a song featured on TVs Private Practice.