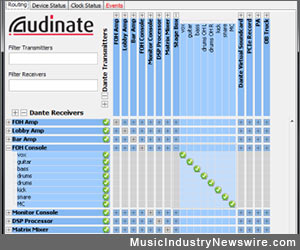 Mary Cudmore, Director of Product Delivery, said “Support for HA Remote in the latest version of Dante Controller, together with the latest release of Dante-MY16-AUD firmware, means that the head amps in Yamaha Rio3224-D and Rio1608-D I/O rack units can be remotely controlled from such equipment as M7CL or LS9 digital mixing consoles”.

About Audinate:
Audinate revolutionizes the way that AV systems are connected, by transporting high-quality media over standard IT networks. Audinate’s patented Dante media networking platform has been adopted by over 60 OEM manufacturers in the professional audio/visual industry. Dante is used extensively for live performance events, commercial installation, broadcast, recording and production, and communications systems. Audinate is a Promoter Member of the AVnu Alliance™. Audinate offices are located in US, United Kingdom and Australia. Visit www.audinate.com for the latest news and information on the company. Dante is Digital Media Networking Perfected.