Audinate and Britannia Row Productions Team up at Wembley

PORTLAND, Ore. (MuseWire) – For the fifth consecutive year, the NFL held a football game in London. Once again, Britannia Row Productions provided live audio for the event to the 86,000 crowd inside Wembley Stadium. In order to deliver pristine sound throughout the venue, Audinate’s patented Dante™ technology distributed the audio for the sound reinforcement system. 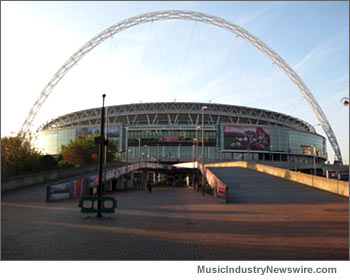 An event of this magnitude, incorporate large amounts of media. This ranges from the pre-game show to video feeds, replays, referee microphones, PA announcements, and live satellite linkups to other games in the league. The home stadiums of the NFL teams are designed with this in mind. These state of the art fixed installations are designed to cope with the complexities of the game. Wembley Stadium in London was designed as a soccer stadium, naturally a very different game, with different demands. This means that all of the additional infrastructure required to deliver a regular season game has to be built on a temporary basis, and incorporated with the fixed installation already in existence.

System engineer Sergiy Zhytnikov explains.”Signal distribution around the field was achieved using Dante linked Lab.gruppen LM 26 and LM 44 Processors. A total of 14 of these units were deployed for the game.” Zhytnikov adds, “The use of fiber optic cabling to deliver both Dante audio and control remotely gave real benefit instead of using 2000m of analog cabling which due to necessity was placed in cabling conduits at field level, along with every other kind of electrical cable imaginable.”

Dante also solved the problem of signal degradation over long distances. Zhytnikov commented “Using Dante on the Lab.gruppen platform is reliable, presents an easier control system is faster to connect and remove, and most importantly, delivers higher quality audio.”

These sentiments were echoed by veteran FOH Engineer Roger Lindsay who commented “This was the cleanest audio distribution system we’ve ever used for an NFL game weekend.”

Lindsay went on to comment that he had received some very positive feedback from the visiting NFL production team on the smooth running of the event and the continual improvements in delivery of this complex task.