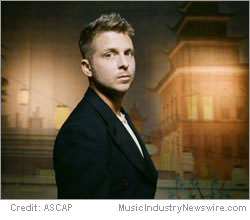 LOS ANGELES, Calif. (MuseWire) – ASCAP today announced additions to the 2012 ASCAP EXPO 12 line-up, headed to the Renaissance Hollywood Hotel, April 19-21, 2012. As the 7th Annual ASCAP I Create Music EXPO draws near, the confirmed panelist list has grown to over 150 people with the addition of nearly 50 new names.

Highlighting this superb list of additions are Ryan Tedder (front man of OneRepublic, who has penned hits like Leona Lewis’ “Bleeding Love,” Beyonce’s “Halo” and Adele’s “Rumour Has It”) and legendary songwriter Jimmy Webb (“Wichita Lineman,” “Macarthur Park”), who is on the ASCAP Board of Directors and serves as Chairman of the Board for the Songwriters Hall of Fame.