GRENOBLE, France (MuseWire) – Arturia this week announced some important updates, including 64-bit support for the CS-80V and Prophet-V virtual instruments, bringing both versions to v2.5. The updates include several bug fixes, as might be expected, and some technical improvements. Additionally, version 1.4 of Spark was released. 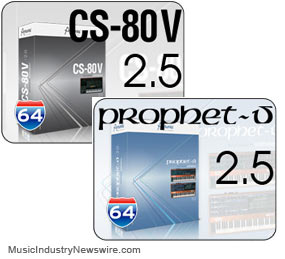 Spark 1.4 is a major update to Spark. Offering 50 new kits made by five contemporary producers, this version also adds new FX’s such as Destroyer, Limiter, Space Pan or Sub Generator. In addition, Spark 1.4 comes with several new features such as the advanced MIDI out function and new Hardware shortcuts.