According to Songs and Soundtracks, A Ghost Worked on the New Instrumental Album by The G-Man

LOS ANGELES, Calif. — When Scott G began to mix The G-Man’s new album, “Audio Takes a Stand” produced by Songs and Soundtracks, he was shocked to see that an unseen entity had completed it for him. “I started to assign levels to the separate tracks of bass, drums, keyboards and guitars — the process known as mixing — but it had already been done,” G states. “It’s my studio, my computers, and I’m the only one with the password, so the gear has a mind of its own or the spirit of the little boy on the cover of the album did the mixing for me.”

Not only were volume levels and sonic frequencies established for each song, the amount of each instrument in the left and right channels was also set. “The ghost created a nice stereo mix,” G says. 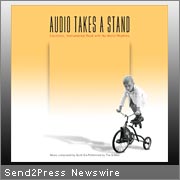 Each of the 12 songs on “Audio Takes a Stand” (www.audiotakesastand.com) is a multi-layered instrumental that uses a combination of rock, dance and ambient sounds to create subliminal reactions from listeners. Described as “sonic applications of hypnotic euphoria,” the album is the culmination of a 3-album journey that began with “Crazed + Dazed” and continued with “Burning Man Soundscapes.”

Songs range from the Pink Floyd-influenced “Angels Behind Your Eyes,” to the Zappaesque “Then Comes the Strange.”

There are videos for 4 of the album’s songs by the FookMovie production company: “Free Nude Photos,” “Beep Logic,” “Dreams on the March,” and “Go West on East Avenue.” To view the “Beep Logic” video: http://www.youtube.com/watch?v=ATjLu9Q8hwE

“Audio Takes a Stand” and other albums by The G-Man are available on iTunes.

About Scott G (The G-Man)
If you listen to the radio, watch television, or dance in a club, you have heard Scott G’s music. His G-Man Music company runs Golosio Publishing and the Songs and Soundtracks licensing firm.