LOS ANGELES, Calif. — With a mixture of rock, trance, ambient and classical music, composer Scott G (recording artist The G-Man) creates a near-psychedelic journey on “Burning Man Soundscapes.” The 14 instrumental tracks are all influenced by the Burning Man social experiment held annually on the Playa in the Nevada desert. Song titles like “Serpent in a Pin Stripe Suit,” “Lovemaking Montage” and “Industrial Dark & Magic” hint at the psychedelic atmosphere of the album.

Like the orchestral music by Alexander Scriabin (1872-1915), composer Scott G is hoping listeners to the “Burning Man Soundscapes” tracks achieve a state of synesthesia, where senses become blended and there is a euphoric reaction to the pure sonics and beats. 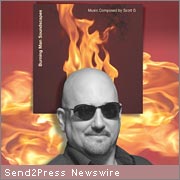 “Scriabin wanted to create a musical work that would be so all-encompassing that at its conclusion the world would dissolve in bliss,” G stated. “While I would also enjoy seeing that, I am setting my sights on inducing bliss in individual listeners. Or at least making them move their hips,” G added.

“Burning Man Soundscapes” is available on iTunes along with all other albums by The G-Man.

Five videos have been made to songs from the album. The collective called FookMovie created videos to “Uniquetown, USA,” “Tribalism Tones,” “Keyboard Flavor Monkey,” “The Bolero Challenge,” and “Industrial Dark and Magic.”

Images from these fast-paced and sometimes surrealistic productions include radically altered photos of the artist, keyboards and guitars underwater, a monkey playing musical instruments, and the artist strobe-morphing into a gorilla. “Viewers can go ape with them,” states NLG, a director at FookMovie.

About Scott G (The G-Man)
You have heard Scott G’s music whether you know it or not. His compositions are utilized in commercials, played in clubs, and are featured on Internet and college radio. His G-Man Music company manages Golosio Publishing and the Songs and Soundtracks music licensing firm.

More information about the album and artist:
http://www.burningmansoundscapes.com .